In 1907, German Henkel first invented the borate and silicate as the main raw materials soap powder.Soap powder is an alkaline synthetic detergent, the main component of soap powder is anion Subsurfactant: Sodium alkyl benzene sulfonate, a small amount of nonionic surfactant, plus some auxiliary agent, phosphate, silicate, Yuanming powder, fluorescent agent,enzyme, etc. After mixing, powder spraying and other processes production. 4A fluorspar is now mostly used instead of phosphate. Synthetic detergents are mainly composed of surfactants, and are equipped with appropriate amount of builders with different functions. Laundry powder refers to powdered (granular) synthetic detergents.

After the 1940s, with the development of the chemical industry, people used petroleum.The smelted chemical substance, sodium tetrapropylene benzene sulfonate, has produced a better performance than soap.detergent. Later, people put phosphoric acid, which can soften hard water and improve the decontamination effect of detergents, to it is formulated into detergents, so that the performance of detergents is more perfect. In order to use, carry,It is convenient for storage and transportation, and the detergent is made into washing powder.Dry cleaning powder can showgood decontamination effect in various water quality such as well water, river water, tap water, spring water, and even sea water.It is widely used in all kinds of fabrics, so its production and use have developed rapidly. Now, soap powder is almost a necessary washing item for every household. 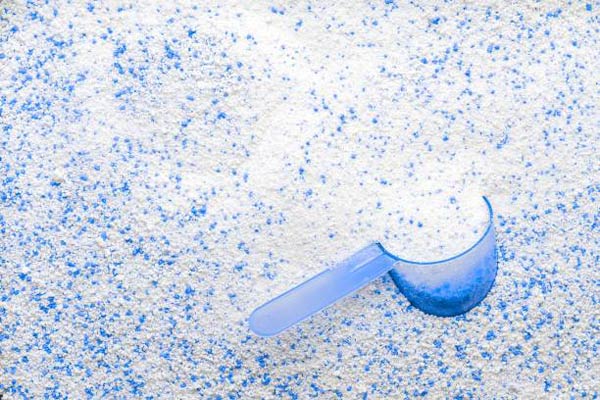 There are five major categories of ingredients in laundry detergents: active ingredients, builder ingredients, buffer ingredients, and additives.Active ingredients and auxiliary ingredients. The main components are: fabric fiber scale inhibitor, anionic surfactant, non-ionic surfactant subsurfactants, water softeners, dirt suspending agents, enzymes, fluorescent agents and fragrances, etc.; poorer washing powders often contain harmful components such as phosphorus, aluminum, and alkali. The role of surfactants in washing powder is to make the washing powder soluble, emulsifying, saturating and cleaning. Clean, sterilize, soften, foam, prevent clothes from static electricity and other functions. Synthetic surfactants have been used for a long time
It has been found to have side effects such as making the hands thicker, and it is now regarded as a major public nuisance polluting the environment. In addition, phosphorus and aluminum bases,
In particular, phosphorus has been banned from being used in washing powder in some developed countries. However, many chemical plants in my country, these products are still being produced, especially some foreign-funded enterprises, and their own local products cannot contain these harmful substances, while in my country, they take advantage of imperfect laws and people’s low awareness of environmental protection, and boldly add active ingredients of these harmful substances.